Want to connect with your family and friends who live on the other side of the world? Don’t want to pay a single dollar? Viber “connects” those dots – for free! 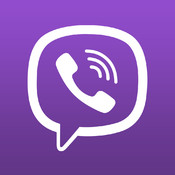 Summary:
Want to connect with your family and friends who live on the other side of the world? Don’t want to pay a single dollar? Viber “connects” those dots – for free!

Connect with the people you love most by sending a text, making a call or sending a photo/video message via WiFi or 3G/4G. This app takes worldwide connectivity to the next level. Viber syncs with your mobile contact list and automatically tells you which of your contacts have the Viber app and those contacts who don’t should be downloading it!

The fun doesn’t stop there. Not only can you make phone calls and send texts, but you can share photos, video, voice messages, locations, stickers, emoticons and more – for F-R-E-E! The app is available for Mac OS, Android, Blackberry OS, iOS, Series 40, Symbian, Bada, Windows Phone and Microsoft Windows.

The chat app, founded and co-owned by four Israeli partners, has been recently acquired by Japanese Internet Giant, Rakuten, for $900 million. Viber media is a Las Vegas and Cyprus-registered company with its development centers located in Belarus and Israel. Although the company is run from Israel, much of its development is outsourced to Belarus due to lower labor-costs.

Viber showcases another example of spectacular planning and app development. The app had its test release on June 30, 2010 in Israel. After just a few months it was released globally on December 2, 2010. The release was rather soft without any extra traffic generation to support it – a prime example of natural growth. Since its release, Viber has had 30 updates. There were many complaints throughout the initial reviews about connection quality, lost contact lists and so on, but since then the development team has ironed out all of the bugs and has managed to create an outstanding app.

For more connectivity information from the most versatile global messaging app, check it out on the App Store.